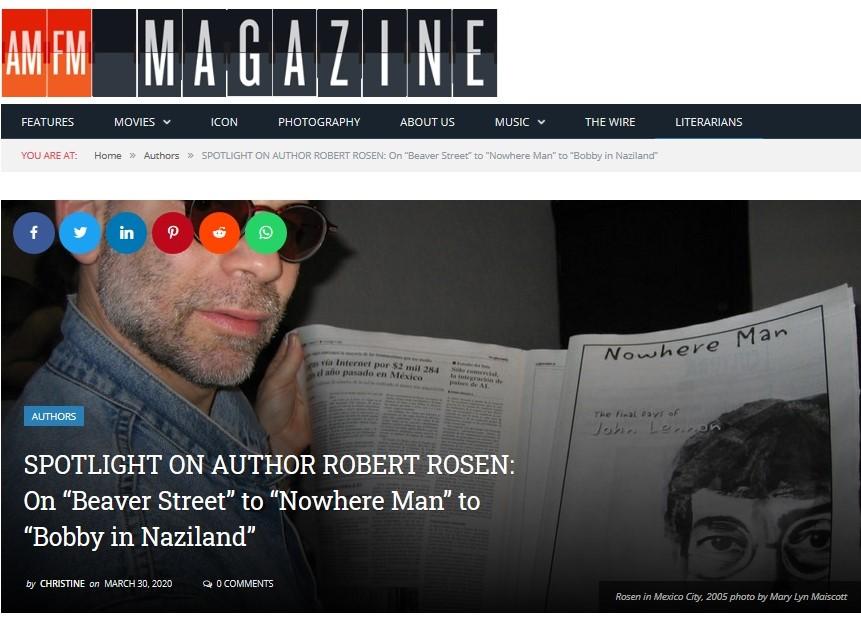 John Wisniewski's interview with me, published in Austin, Texas–based AMFM Magazine, is an in-depth discussion of my three books and my favorite authors.

John Wisniewski: Tell us about writing your memoir, Bobby in Naziland, Robert. Why did you decide to write it?

Robert Rosen: The opening scene in my previous book, Beaver Street: A History of Modern Pornography, takes place in my father's candy store in 1961. I knew when I was writing those few paragraphs that I was only scratching the surface, that there was something happening at that time and in that place that warranted further exploration. So when I finished Beaver Street, I started writing down everything I could remember about Flatbush and Brooklyn in the mid-1950s through the mid-1960s. This went on for a couple of years. The more I remembered, the more I remembered. I was also looking though old newspapers and magazines, old photographs, watching old TV shows and commercials on YouTube, and doing basic library research. The end result was 400 single-spaced pages of notes, fragments, anecdotes, and ideas. When I read through those pages, looking for common themes, what jumped out at me were Nazis. They were everywhere—because I grew up surrounded by Holocaust survivors and W.W. II veterans who'd fought the Nazis, including my father, who'd liberated a concentration camp. I say in the book that the war "lingered like a mass hallucination"—hence the title.

Also, because the generation that lived through W.W. II is dying out; because there's a resurgence of Nazism; and because Holocaust denial has become way too common, it was a book that needed to be written. What happened during the war and its aftermath cannot be forgotten.

I originally wrote Bobby in Naziland as a novel. Because the material is so personal, I felt more comfortable calling it fiction and disguising people and events as much as possible. But when I submitted it to my publisher, Headpress, they suggested changing it to a memoir. I agreed to do that and changed maybe 20 percent of the book. That took another year. If I was calling it a memoir, I wanted to get it right. So I phoned a number of people who are characters in the book, just to make sure that what I was saying about them and their families was factually correct. Much to my surprise, some of them asked me to use their real names, though a lot of people in the book remain pseudonymous.

Robert Rosen: Hunter Thompson, Henry Miller, and Philip Roth are my holy trinity. I've read Thompson's Fear and Loathing in Las Vegas about 25 times and have parts of it memorized. Same with Miller's Tropic of Cancer and Tropic of Capricorn. (Though the book that's closest in tone and spirit to Bobby in Naziland, I think, is Miller's Black Spring.) And I mention Roth because no book has ever blown my mind as much as Portnoy's Complaint did when I picked it up at 16, having no idea what it was about.

Not far behind are Joseph Heller for Catch 22, Joan Didion for Slouching Towards Bethlehem and The White Album, and George Orwell for pretty much every book and essay he ever wrote.

And I have to mention J.D. Salinger because of how The Catcher in the Rye became so intertwined with my John Lennon bio Nowhere Man.

You can see bits and pieces of all of these writers swirling around in all my books.

John Wisniewski: Could you tell us about writing your previous book Beaver Street? What research went into writing it?

I was wrong. One of the chapters, "The Secret History," tells how the company that published Marvel Comics, which was founded by Martin Goodman, mutated into Swank Publications, which was run by Martin's son Chip. Most people who worked for Swank knew that something amazing had happened there a long time ago. You could feel this weird energy in the office, which I described in the book as "the lingering presence of a lost civilization." But nobody, especially Chip, wanted to talk about it. The attitude was that Marvel was the past, it no longer mattered, and there was nothing to discuss. The story was so complicated—so many different companies under so many different names—and so much of it was hidden from plain sight, that it took me the better part of a year to untangle it and put it together in a coherent form.

I hadn't set out to write a book about 20th century history, politics, and technology as seen through a pornographic lens, but that's what Beaver Street became.

John Wisniewski: Could you tell us about Nowhere Man: The Final Days of John Lennon? It proved to be a different view of Lennon, unheard by the public before.

Robert Rosen: Nowhere Man is a different view of John Lennon because five months after Lennon was murdered, his personal assistant gave me Lennon's diaries, which covered the last six years of his life, 1975–80. These were his years of seclusion, when he'd dropped out of public life after his son Sean was born, and spent most of his time holed up in the Dakota, smoking weed, watching TV, reading, conferring with his tarot card reader and psychic, brooding about Paul McCartney, going on $100,000 shopping sprees with Yoko, sleeping, programming sex dreams, carrying on an affair with May Pang, and writing about all this in his diary.

I explain in the book that his PA, Fred Seaman, who was my friend at the time, told me that Lennon had a premonition of his death and had told him that if anything should happen, Fred was to write the true story of his, Lennon's, life, and to use any source material he needed. Fred asked me to help him carry out this project, and that's why he gave me the diaries. They were the key to Lennon's consciousness.

I transcribed the diaries over a period of several months. Then Fred sent me out of town. When I came back, my apartment had been ransacked and everything I'd been working on had been taken—the diaries, transcripts, photos, tapes, and a lot more. I knew Fred did it. He had the key. He then called me, admitted he did it, and said I was off the project.

I was in a state of shock. But then I realized I had portions of John's diaries memorized. I started writing down the bits I could remember. Just as with Bobby in Naziland, the more I remembered, the more I remembered—except it was Lennon's life, not mine. Soon I began approaching publishers with the manuscript. For 18 years the book that became Nowhere Man was rejected by everybody. People didn't believe the story, or if they did believe it they said I couldn't prove it.

The story haunted me, it just wouldn't leave me alone. And I kept working on it for those 18 years, refining it, remembering more things, adding more information. In 1999, my agent, Jim Fitzgerald, who recently passed away, sold it to Soft Skull Press. They published it in July 2000. It became an instant bestseller in five countries, was translated into a half-dozen languages, and now, 20 years and 14 editions later, it goes on. Nowhere Man changed my life. The book opened doors for me all over the world. For that, I'm eternally grateful to John Lennon.