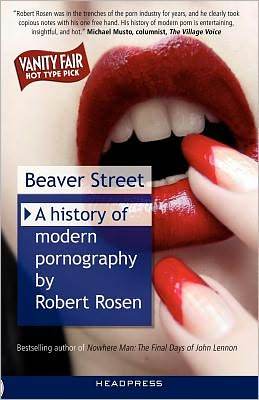 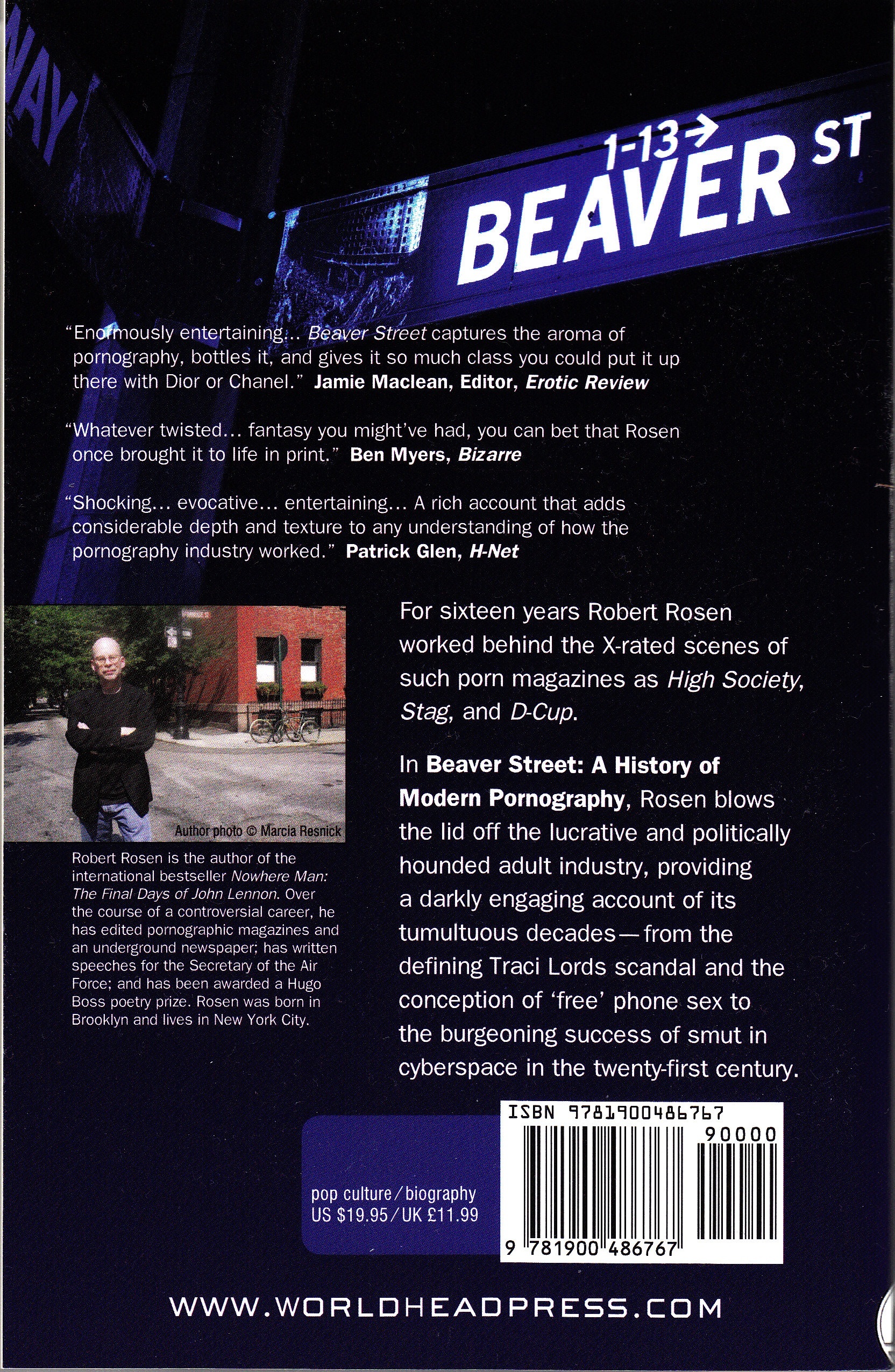 Order Beaver Street from Barnes & Noble.
“Fascinating, eye opening, sometimes disturbing ... and probably one of a kind—I know of nothing like it.” —Goodreads
“An interesting and witty look at pornography from the early ’70s through late ’90s.” —StorErotica 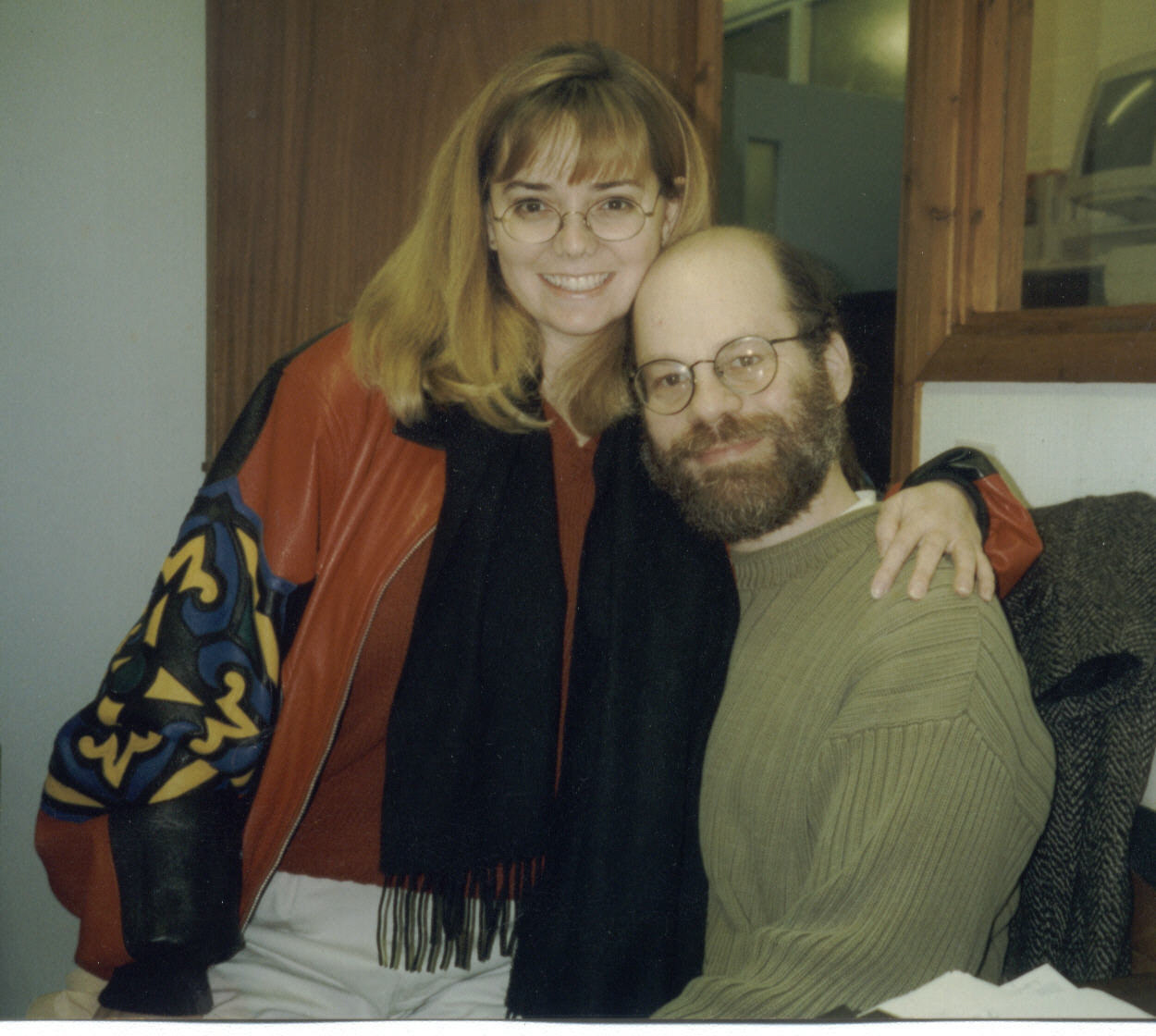 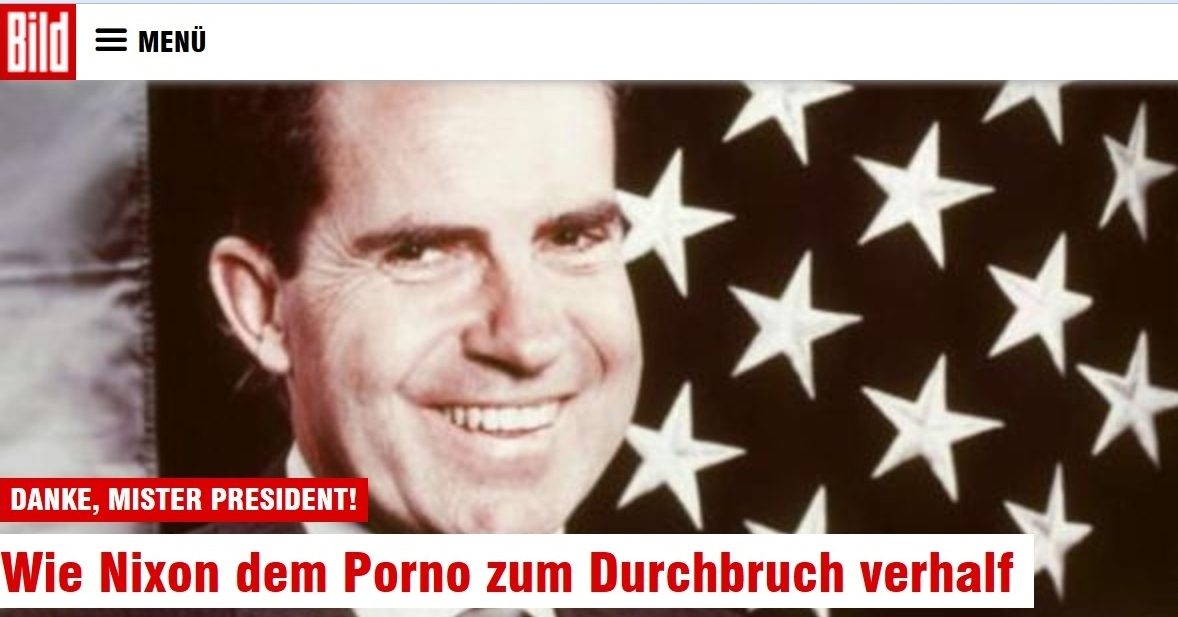 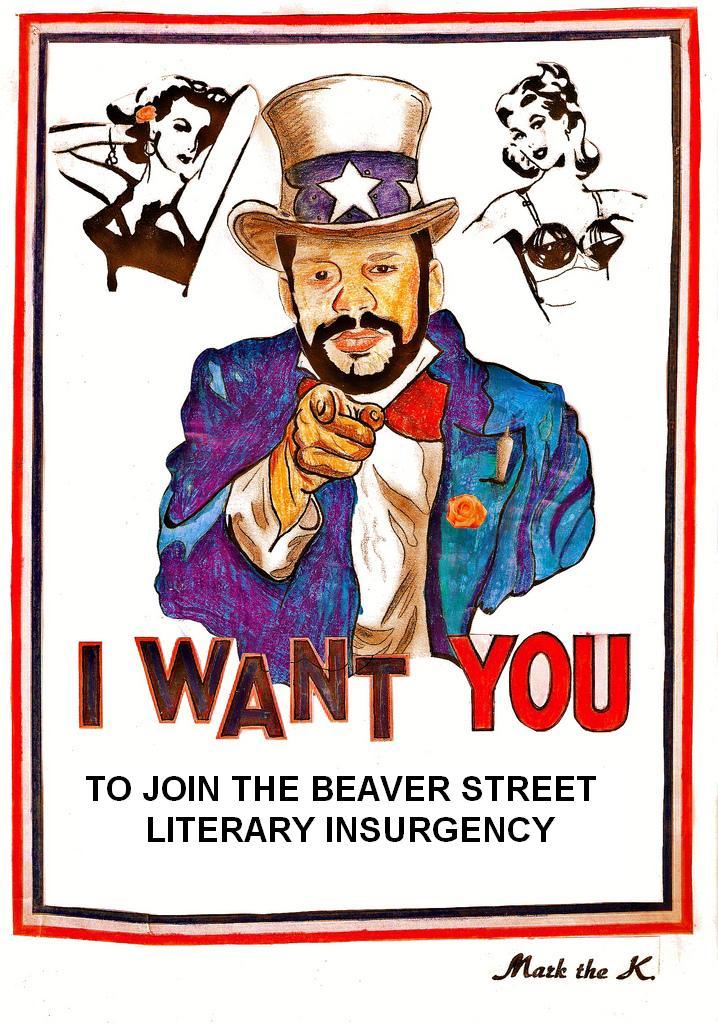 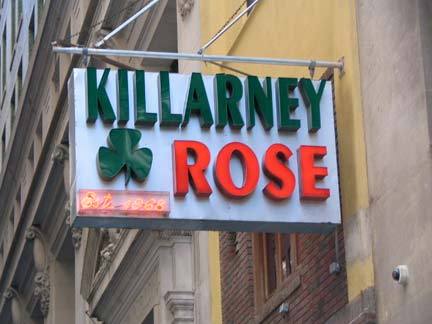 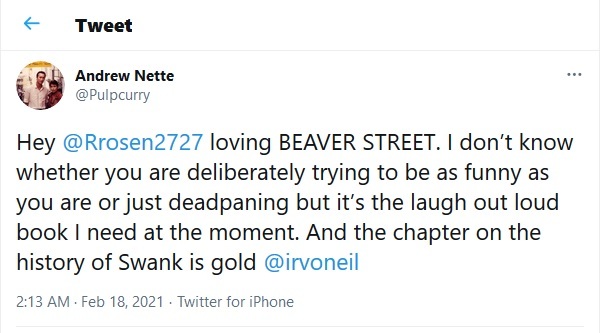 Prologue: A Kid in a Candy Store 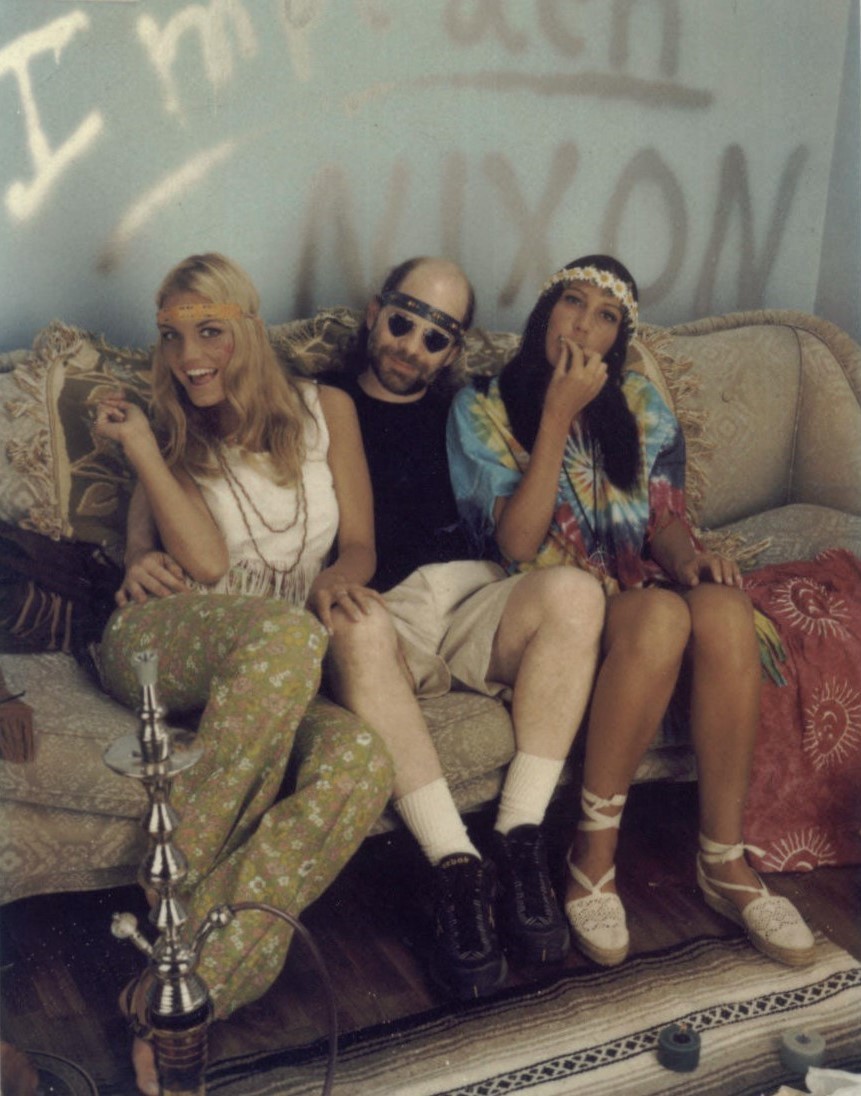 Once, many years ago, my father owned a candy store on Church Avenue in Brooklyn, around the corner from where we lived. The whole family worked there—my grandfather, my grandmother, sometimes my mother, my uncle in a pinch, and even me. By the time I was nine years old I knew how to mix egg creams, sell cigarettes, and put together the Sunday papers. I also understood on some instinctive level that when a new customer walked in and muttered under his breath, “Where do you keep the books?” he was talking about the special rack in the back of the store where my father stocked some of his favorite works of literature. They included My Secret Life, by Anonymous; My Life and Loves, by Frank Harris; The Autobiography of a Flea, also by the ever prolific Anonymous; Tropic of Cancer, by Henry Miller; and Last Exit to Brooklyn, by Hubert Selby.

Every weekend a half-dozen of my father’s cronies—the neighborhood regulars—would gather in the store. Most of them were in their late thirties, my father’s age at the time, and they struck me as a streetwise and sophisticated lot. One of them smoked Gauloises. Another worked for TWA and made monthly “pleasure trips” to Europe. And I’d sit by the window a few feet away, listening to them as I made change for newspapers. Some days they’d amuse themselves deconstructing the New York Giants and their bald but talented quarterback, Y.A. Tittle, whose name they repeated over and over, seemingly for the sheer joy of saying it. Other days they’d swap World War II stories, horrifying tales of seeing corpses piled like cordwood after the Battle of the Bulge, or of butchering a cow—after not eating fresh meat for months—in a French village just liberated from the Nazis. But their greatest flights of oratory fancy, surpassing even the passion they expressed for the Playboy centerfold, were their expert critiques of the latest book to appear on the special rack.

A copy of the work in question would materialize on the counter, and they’d pass it around, scrutinizing the often salacious cover art and laughing uproariously when somebody would spontaneously read a provocative passage soto voce—presumably so the words wouldn’t penetrate my innocent and attentive ears.

Though I was far too young to fully grasp what these books were about or to realize that many of them had made it to the rack only after having survived a protracted censorship battle, the pleasure they gave my father and his friends was unmistakable. It was clear to me even in 1961 that these books mattered—a lot—and that if I were going to write books, which I thought even then I’d like to do, then these were the kinds of books I wanted to someday write.

I’ve been a professional writer now since 1974, when I graduated from the City College of New York. My name is Robert Rosen, and if you’ve heard of me, it’s probably through my John Lennon biography, Nowhere Man, which was a bestseller in the U.S., England, Japan, Mexico, and Colombia.

Now I’ve written a new book—the one you’re reading. I call it Beaver Street: A History of Modern Pornography, and it’s a book that I think might have earned a coveted slot in my father’s special rack. Beaver Street is an investigative memoir, a term I use to describe the interplay of the personal and historical.

Or perhaps you recognize that fellow in the photograph on page one. That’s me, or, rather, Bobby Paradise. It’s a test-Polaroid taken on a 110-degree day in June 1999, at Falcon Foto, a photography studio located in an isolated canyon in the San Gabriel Mountains, just north of L.A. The photographer and his crew were setting up to shoot a lesbian-hippie fantasy (working title “Beaver Barbers of ’69”) that I’d ordered for Shaved, one of a dozen titles I was editing at the time. That’s why I’m sitting between two models who look as if they were plucked off a Haight-Ashbury street corner and that’s why I’m wearing a headband and heart-shaped sunglasses. It’s not the way I normally dress, even in California. I was just getting into the spirit of the shoot.

I was directing that day. My job was to tell the models which bits of clothing and lingerie to peel off, which positions to pose in, where to place their fingers, mouths, tongues, breasts, nipples, toes, legs, labia, where to spread the shaving cream, and what to shave first.

By 1999 I was totally burnt out on smut, on the very idea of having to look at it, of having to think about it, and especially of having to create it under ever more demanding deadline pressure. The fun, to say the least, was gone. But I was trapped, because after 16 years, I didn’t know what else to do. I’d become a professional pornographer and my career options were limited.

And I saw this government war of vengeance give birth to a new class of super-taboo pornography—the “barely legal” woman—that was so much in demand, it sent sales of all things X-rated skyrocketing into the uncharted realms of the stratosphere.

And finally I saw the Internet transform the underground phenomenon of peep shows, dirty movies, and sleazy magazines into a ubiquitous cyber-force that penetrated virtually every niche of the mainstream media and supplanted rock ’n’ roll as America’s #1 cultural export.

But I’ll begin my story in the mid-seventies, at a time when, just as I was beginning to find my way as a writer, I embraced—perhaps naively or perhaps intuitively—the idea that pornography and transgressive art could be one and the same.

Photo of Stoya by JC from USA.