Return of the Natives 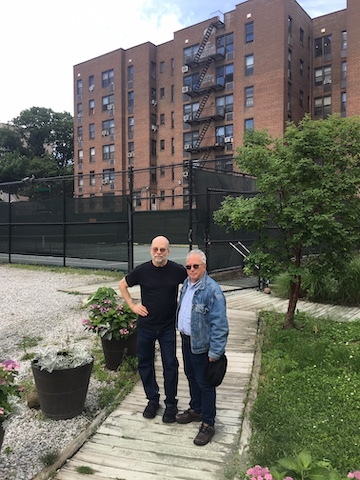 I became aware of Stuart Soffer at Brooklyn's Ditmas Junior High School. He was the kid who was always running for office. I don't remember if I voted for him or not. Decades later, long after he fled Flatbush for California, we reconnected through Facebook.

Stuart was recently in New York, and we decided to return to Flatbush and visit some of the places I wrote about in Bobby in Naziland. He lived a few blocks from where I lived, so my old turf was his old turf. He was, in short, the perfect audience for my new book.

Stuart blogs for The Almanac, his local Menlo Park newspaper. Here's the first paragraph of his piece about our return to Flatbush:

Bobby in Naziland: A Tale of Flatbush (Headpress, available September 1, 2019), is the third literary work from author Robert Rosen, a friend from Junior and Senior High Schools in the Old Country—Brooklyn. His first book was Nowhere Man: The Final Days of John Lennon, followed by Beaver Street: A History of Modern Pornography. (Unknown to Bobby, I was once retained by Playboy Magazine as an expert witness in a trademark matter to detail the relation between search terms and banner ads. My expert report could have received an x-rating due to the pictures.)

You can read the rest here.