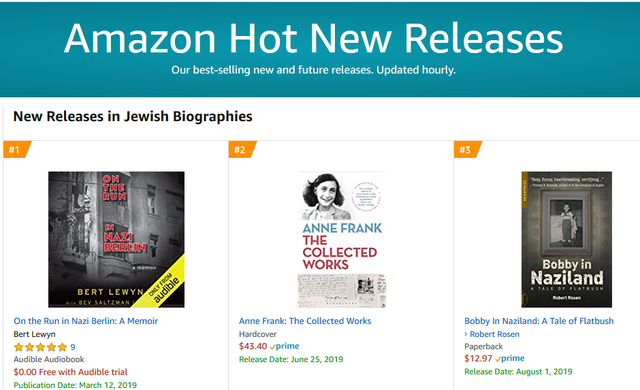 Amazon has classified Bobby in Naziland as a "Jewish Biography," a "Baseball" book, and a "Beatles Biography."

I never thought of myself as a Jewish biographer until Amazon categorized Bobby in Naziland as a "Jewish Biography." So, I figured, if that's what Amazon wants to call me, then I'll embrace it. The book is, after all, about growing up Jewish in post-war Flatbush.

Soon after Amazon made the book available for pre-order, Bobby in Naziland appeared on a list of soon-to-be-released bestselling Jewish biographies, alongside The Collected Works of Anne Frank. It was a surreal moment.

Amazon has also classified Bobby in Naziland as a baseball book because there's a lot in there about the Brooklyn Dodgers and their two arch-rivals, the New York Giants and the New York Yankees. And while they were at it, Amazon called it a Beatles Biography, too--because Bobby in Naziland describes the moment, 78 days after the JFK assassination, when the Beatles arrived, and frozen-in-the-1940s Flatbush gave way to the 1960s.

So, if you like Jewish biographies, baseball, and Beatles, Bobby in Naziland is probably a book you'll want to read.