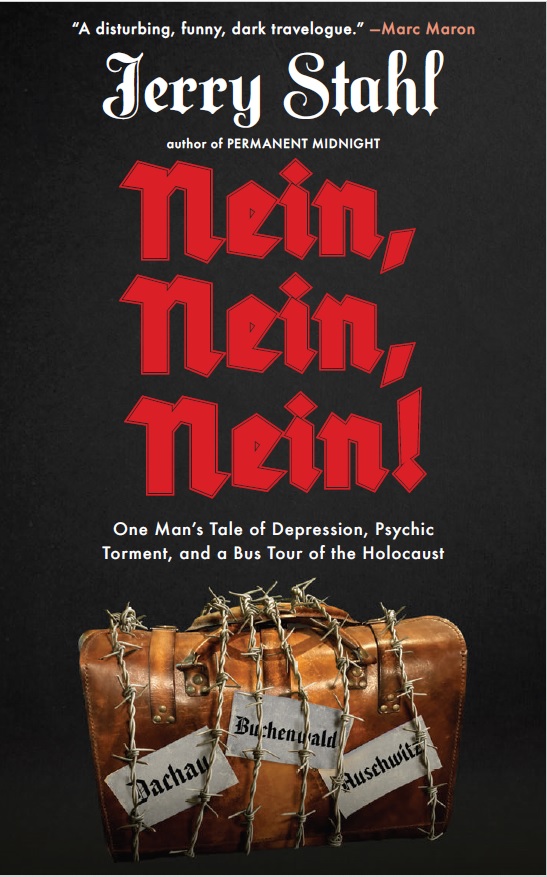 Nein, Nein, Nein! is like a mirror image of A Brooklyn Memoir.

In 2016, at the age of 63, Jerry Stahl, a writer best known for his addiction memoir Permanent Midnight and his work on TV sitcoms like Alf, was contemplating suicide. His marriage and career had fallen apart; he'd been diagnosed with hepatitis C; doctors had found a suspicious mass on one of his kidneys; and a botched surgery had left him "wearing a bag" for what he thought would be the rest of his life. But instead of jumping off a bridge, as he was planning to do, he chose to find a reason to continue living. Stahl decided to go to "Naziland" to take a guided tour of concentration camps in Germany and Poland. He wanted to come "face to face with the Giant Maw of Hell" and experience up close "the darkest stain on humanity." This, he thought, would allow him to put his own problems in perspective.

He then wrote a book about it.

In 1956, at the age of four, I became aware I was living in a place where people who'd survived the concentration camps of Germany and Poland were everywhere—in the stores, in the streets, on the subway. Some of my neighbors were mutilated, and so many others, more than I could count, had those blue numbers tattooed on their forearms. Between the concentration camp survivors and the army veterans like my father, who'd fought the Nazis, not a day passed when I didn't hear somebody talking about Hitler and Germany. It was as if World War II hung like a mass hallucination over Flatbush and other large swaths of Brooklyn. William Styron, who spent a few months in Flatbush in 1949, noticed it too and set his autobiographical Holocaust novel, Sophie's Choice, in a rooming house where he and the title character both lived, across the street from my grade school.

In an effort to make sense of what I'd experienced as a child but had blotted from my memory for most of my life, at the age of 63 I began writing a book about Flatbush, a neighborhood I'd come to think of as "Naziland."

That Stahl's Nein, Nein, Nein! (Akashic Books, Brooklyn) and my book, A Brooklyn Memoir (Oil on Water Press, London), are being published two days apart, on July 5 and 7, by different publishers in different countries, is hardly a coincidence. With the youngest surviving World War II veterans in their 90s, and the youngest surviving concentration camp inmates in their 80s (two people born in Auschwitz are known to be alive), these two books, mirror images of each other, are part of a sudden outpouring of literature, film, and journalism about the Holocaust and the war while they remain in living memory.

The most recent example, the HBO movie The Survivor, directed by Barry Levinson, is based on the true story of Harry Haft, played by Ben Foster, an Auschwitz inmate who survives by performing in to-the-death boxing matches with other prisoners for the amusement of his Nazi captors. After the war, Haft resettles in Brooklyn, among a multitude of fellow survivors, and becomes a professional boxer with a bad case of PTSD.

Films such as Dara of Jasenovac, from Serbia, about the Jasenovac concentration camp; The Auschwitz Report, from Slovakia, about an escape from Auschwitz; and L'equilibrista con la stella (The tightrope walker with the star), from Italy, about a circus performer who hides a Jewish girl from the Nazis, were released in 2021.

"Harald Jähner: The German author on struggling to forgive his parents' generation" —The Guardian, April 9

"They Are the Heirs of Nazi Fortunes, and They Aren't Apologizing" —The New York Times, April 19

"My Great-Uncle, The Holocaust's First Jewish Victim" —The Atlantic, May 5

The war in Ukraine and a rising tide of neo-Nazism, Trumpism, and Holocaust denial seems to have inspired a need to produce accounts of 80-year-old atrocities while eyewitnesses still walk the earth. In Nein, Nein, Nein! and A Brooklyn Memoir, Stahl and I—Jewish writers born one year apart—have immersed ourselves in the details of those atrocities.

One of the eeriest resemblances between the books involves our descriptions of the freezing/thawing "medical" experiments the Nazis were so fond of conducting.

One of the eeriest resemblances between the books involves our descriptions of the freezing/thawing "medical" experiments the Nazis were so fond of conducting. The ostensible purpose of "The Treatment of Shock From Prolonged Exposure to Cold, Especially in Water," as the experiments were bureaucratically known, was to determine how long it took a man to die in freezing water. The answer according to Dr. Sigmund Rascher, who was in charge of the experiments and guarded his turf jealously: 80 minutes to 6 hours if the subject was naked; 6 to 7 hours if he was clothed.

From Nein, Nein, Nein!, when Stahl is touring Dachau:

Another of Rascher's ideas was to enlist the aid of prostitutes, often Romani ladies plucked from the women's concentration camp at Ravensbrück. The doctor's idea was to press the poor, unconscious individual's body between the females for a slow "body massage." This last, for reasons we can probably surmise, was so appealing to Rascher, he brought in Himmler to observe the proceedings.

From A Brooklyn Memoir, when I'm describing the Eros/Thanatos thrill of reading, at age eight, William Shirer's The Rise and Fall of the Third Reich:

Naked men were put outside in sub-zero temperatures and doused with cold water every hour until they stopped screaming. Then, on the verge of death, they were brought inside so Nazi doctors could conduct "warming experiments"—from which they concluded that the best way to thaw out a frozen man was to put him in bed with one or more naked women, and let the women's body heat warm him as they had "intercourse." The doctors also determined through repeated testing that one naked woman unthawed a man faster than two, because, they deduced, a "chilled man" and one woman were both less inhibited and clung more closely to each other during the sexual act.

Similar descriptions, often laced with dark humor, occur throughout both books and demonstrate one effect the Holocaust had on an overlooked segment of the post–World War II generation. While literature about the trauma of children born to Holocaust survivors, like Art Spielgelman's Maus, proliferates, Nein, Nein, Nein! and A Brooklyn Memoir (originally titled Bobby in Naziland) are the only books I'm aware of about those of us born in the late 1940s and early 1950s who had no family connection to Holocaust survivors yet were unable to escape the trauma. Because if you grew up Jewish in a Jewish neighborhood in those early postwar years, the Holocaust was an unavoidable reality that you were veritably marinated in—I've known what Auschwitz meant for almost as long as I've understood language.

Stahl and I both became obsessed with the mechanics of the Final Solution—the trains, the gas chambers, the crematoria.

He grew up in Pittsburgh and writes about how his father, who died by suicide when Stahl was a teenager, had escaped from Lithuania at age 10, after his own father was killed in a pogrom, but never spoke of his "missing years"—which led to Stahl's feeling a "nameless guilt" because he had it so easy while his father had it so hard.

My father, an infantry veteran who'd participated in the liberation of a slave labor camp, never spoke to me in detail about what he'd experienced, despite my persistent questions. But beyond my proximity to a bitter man haunted by what he'd witnessed were the stories my mother told me. Obsessed with the need for Adolf Eichmann, organizer of the Final Solution, to pay the ultimate price for his crimes against humanity, she was more than willing to discuss the things my father refused to talk about—like the slave labor camp and how the gas chambers worked.

Because so many Flatbushians were either war veterans or Holocaust survivors, a significant portion of the population—as Levinson shows in The Survivor—were suffering from some form of PTSD (as it was not yet called). And that trauma inevitably filtered down to those of us who'd not experienced the traumatizing events firsthand. The PTSD showed itself in the rabid hatred and bigotry of both adults and children towards anybody outside their tribe. And it showed itself in the perpetual violence among the kids, who routinely beat the shit out of each other for no discernible reason.

Then there's Donald Trump—because these days you can hardly write a book about Nazis without referencing him. In his cameo appearance in A Brooklyn Memoir, I say that the twice-impeached president grew up in Queens, where he was exposed to an even more virulent strain of bigotry than I was exposed to in Flatbush. Trump's feral genius is his Hitler-like ability to transform that hatred into political power.

Stahl describes Trump as "an anti-Semitic sleazeball" and blames him for "fucking up" his book. When he began writing Nein, Nein, Nein!, in 2016, Trump was not yet president. By the time Stahl had finished writing it, in 2021, he says, his Trump vs. Hitler comparisons felt dated and played out. He also notes that the Trump-loving Proud Boys and other neo-Nazis and white supremacists are but pale imitations of the real thing—though he sees no difference between the forced hysterectomies ICE, under Trump, performed on migrant women and the Nazis' forced hysterectomies performed in concentration camps.

Stahl and I took different roads for different reasons to arrive at the same destination: Naziland. His visit to the real thing left him feeling only "an overwhelming emptiness." When I returned to my own metaphorical Naziland, I felt sadness, but it was tinged with nostalgia for the streets of my youth.

A Brooklyn Memoir is available for pre-order on Amazon and all other online booksellers.